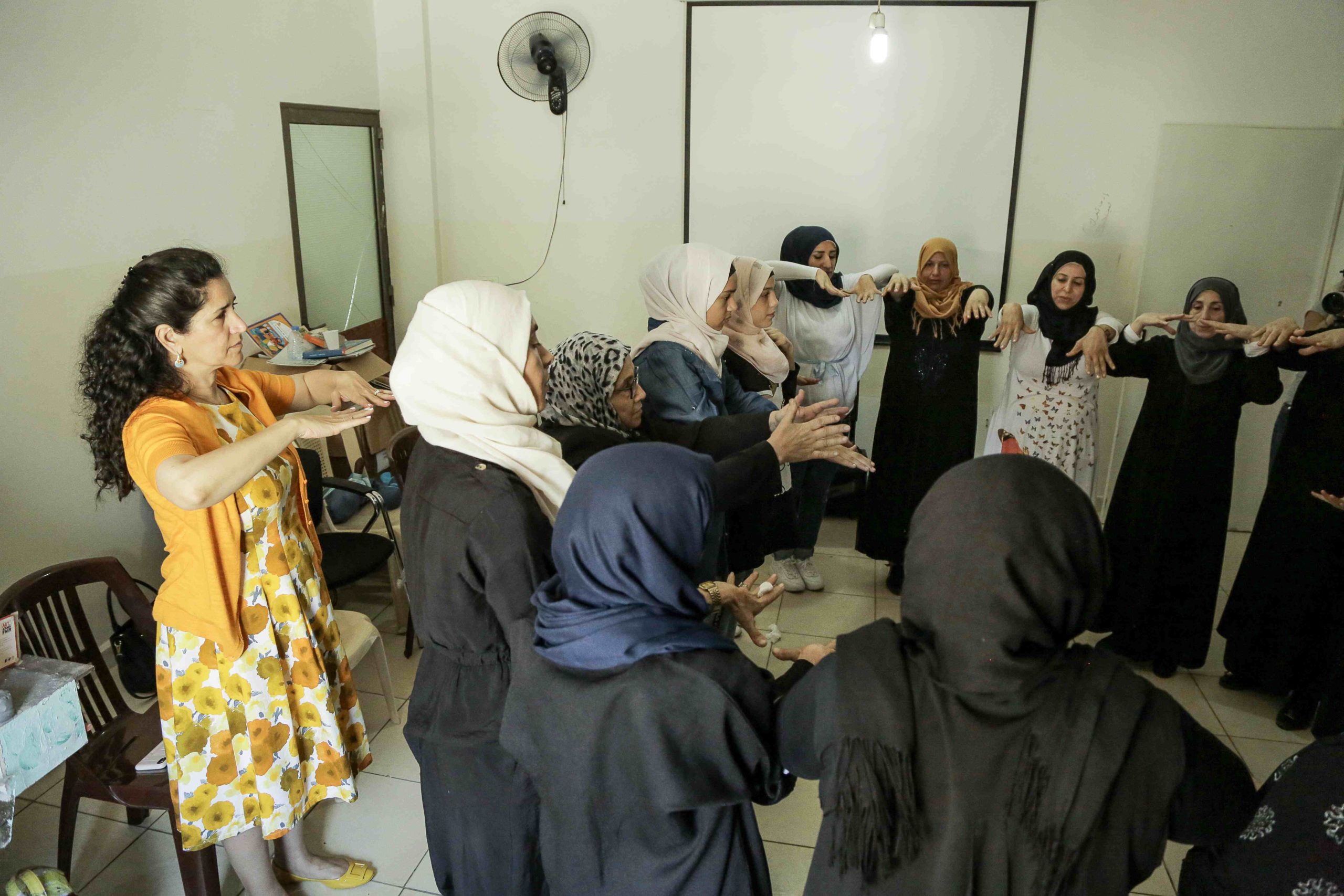 The Intisar foundation works to help and empower women affected by war with drama therapy. Its founder, Her Highness Sheikha Intisar al-Sabah, was motivated to help other women in the Middle East following her experience of the invasion of Kuwait. We were honoured when she joined us to discuss the role of women in negotiation, bringing a focus on building resilience and mental strength which also supports the CCHN’s Community of Care initiative focusing on a similar aim for humanitarian frontline negotiators.

Her Highness Sheikha Intisar al-Sabah is a member of the Kuwaiti royal family. Married at the age of 22, she separated from her husband when her daughters were three and four years old. A year later, when Iraq invaded Kuwait, she fled amid gunfire with her family to Saudi Arabia. She used games of hide-and-seek to alleviate the trauma for her daughters, but the violence took its toll on her, leaving her angry and fearful.

The society she was born into had always made her feel inadequate for being a girl and she suffered from imposter syndrome. Her journey to improve her own self-esteem was rewarding and it made her want to help other women affected by war. And so, she established Intisar Foundation, a non-governmental organization (NGO) that uses drama therapy to help women overcome trauma.

I am blessed to be a woman

As a child, Sheikha Intisar often felt that people were disappointed that she was a girl which caused her to feel ashamed and unworthy.

“My own journey taught me to be genuinely kind to everybody. I have learned to understand where people are coming from, even if I think what they are doing is wrong. Now, after a long struggle, I know how blessed I am to be a woman, to have feminine power and to be able to see the bigger picture.”

With time, Sheikha Intisar started to understand that she became the person that other people projected onto her. She realized that everything you see on the outside is a reflection of what is on the inside. For instance, if someone is angry with you, very often this person has inner anger. Their negativity is about them, not you. She also learned from those around her, including her fearless grandmother and her gentle mother. 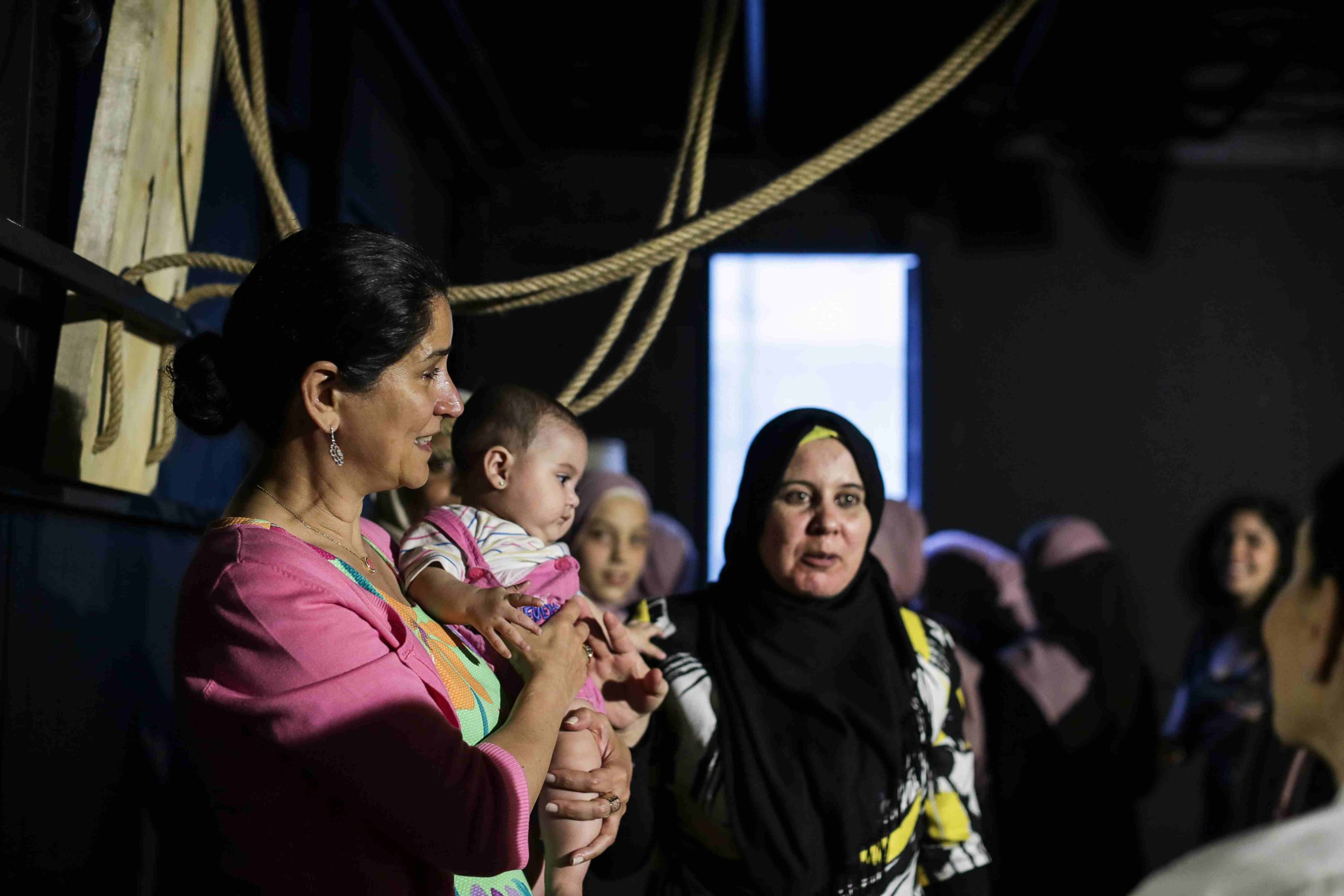 Her Highness Sheikha Intisar al-Sabah (left) celebrated a successful dramatherapy performed by women who have suffered the trauma of war and survivors of gender-based violence. (Photo: Intisar Foundation)

In the course of her work, Sheikha Intisar interacts with many of the women who need help. There is one person, however, who made an indelible impression on her. When they met for the first time, the woman was numb, and her eyes glazed. Disengaged and showing no emotion, her behaviour was robotic. Sheikha Intisar learned that she had been abused and put in a mental institution by her husband, where she was subjected to electroshock treatment.

“When you experience a shock, first it speaks to your body, then your emotions and then your intellect. Most therapies only address the effects on your intellect. With drama therapy, you can work on all three levels,” Sheikha Intisar explained.

During the therapy programme, the woman slowly recovered. She finally left her husband of 18 years, got a small apartment and earned a living to support herself and her children.

“I will never forget the day she told me that she could not have done it without drama therapy. We work with so many people who learn how to find strength from within. When they themselves change, then the whole world changes for them.”

When we asked Sheikha Intisar about the biggest obstacle she faced when establishing her businesses and NGOs, she laughed. “Some people will not like this, but the greatest obstacle was me. I was trapped by my own trauma and the feeling of not being good enough. It is only when I overcame my internal conflicts and decided to stop fighting the world that I changed and became stronger, becoming the person I am today.”

As for her, mental resilience is one of the keys for women to success in their work and careers. “Work on your mental capacity, and work on your ability and strength! Don’t do it just intellectually. Also, you have to work on your glass ceiling: shatter it. Then you will realize that you need to cross the limit.  If you build your resilience and find solutions to emotional reactions, you will definitely see the path to change for the better.”

Negotiating with the gatekeepers

The Intisar Foundation works with many women who have suffered the trauma of war, including survivors of gender-based violence in the Middle East. The foundation often encounters a range of “gatekeepers”, people who control access to services and may prevent women from accessing the support they need.

“When a woman blocks another woman from accessing support, I can only offer my own interpretation of what could be happening – it is not based on any research. Many women in the Middle East consider themselves second-class citizens because it has been like that for hundreds of years. They think that their power comes from men. Women avoid upsetting men because they think they will lose their power.

For example, when a grandmother covers up a sexual assault committed against her granddaughter, she believes she is protecting her own power – power that comes from the man responsible or from other men. Women without men’s power are alone and may even die. Covering up and not admitting what happened helps the grandmother protect her own power, and she believes it also protects her granddaughter and the wider family. This is not based on science; it is just an explanation from my own experience.

What is interesting though, and this is actually based on science, is that it is women who uphold traditions and cultural norms. In the grandmother’s mind, she is protecting the family. What is not understood though is that this is ultimately destructive. But when you are fearful, it is difficult to think rationally.”

There are inner gatekeepers too, and Intisar Foundation’s therapist often needs to negotiate with victims to allow themselves to heal.

“Women rarely trust outsiders for reasons of safety, so you need someone from within a community who women trust. There is also a tendency to denounce what has happened. We must be careful not to make women feel ashamed or vulnerable; otherwise, we risk burying them deeper. What is needed is a very slow process of helping victims understand that what has happened is not their fault.

A woman who has experienced trauma needs time to process what has happened. She needs time to feel human again, to think differently about herself and to find strength from within. In many cultures, a woman on her own is completely powerless, so women may, unfortunately, be willing to sacrifice their own physical and mental well-being in order to remain safe.”

This article is part of the Legitimacy, Diversity and Women in Frontline Negotiations Project, which grew out of the CCHN’s study on the role of diversity in frontline humanitarian negotiation, presented at the Annual Meeting of Frontline Humanitarian Negotiators in Geneva in December 2018. The CCHN will continue the conversation on the topic of diversity in frontline negotiations and empower local and international humanitarian workers through our peer-exchange events. We also encourage more women to take part in our workshops, designed to build skills and knowledge in preparation for negotiations in the field. The views expressed in this article are those of the author and do not necessarily reflect the official opinion of CCHN, any of its Strategic Partners nor the authors’ organizations. Are you our member of CCHN Community of Practice? Read the full interview on CCHN Connect.

Intisar Foundation is the first charitable organisation to provide psychological support programmes of drama therapy to Arab women traumatised by war and violence (domestic, physical, mental violence..). It has been hailed as an innovative, bottom-up approach to Peacebuilding in the Arab world. Intisar Foundation uses dramatherapy – since conventional therapies have a strong stigma and aversion in the Arab World – to help Arab women heal their trauma and the psychological scars of war, build resiliency, psychological growth, raise their voices to be seen and heard and become self-empowered.

The ultimate goal of the Foundation is to bring peace to the Arab world to heal 1 million Arab women for Peace in the next 30 years.