She’s a Woman, a Leader, and a Frontline Negotiator! 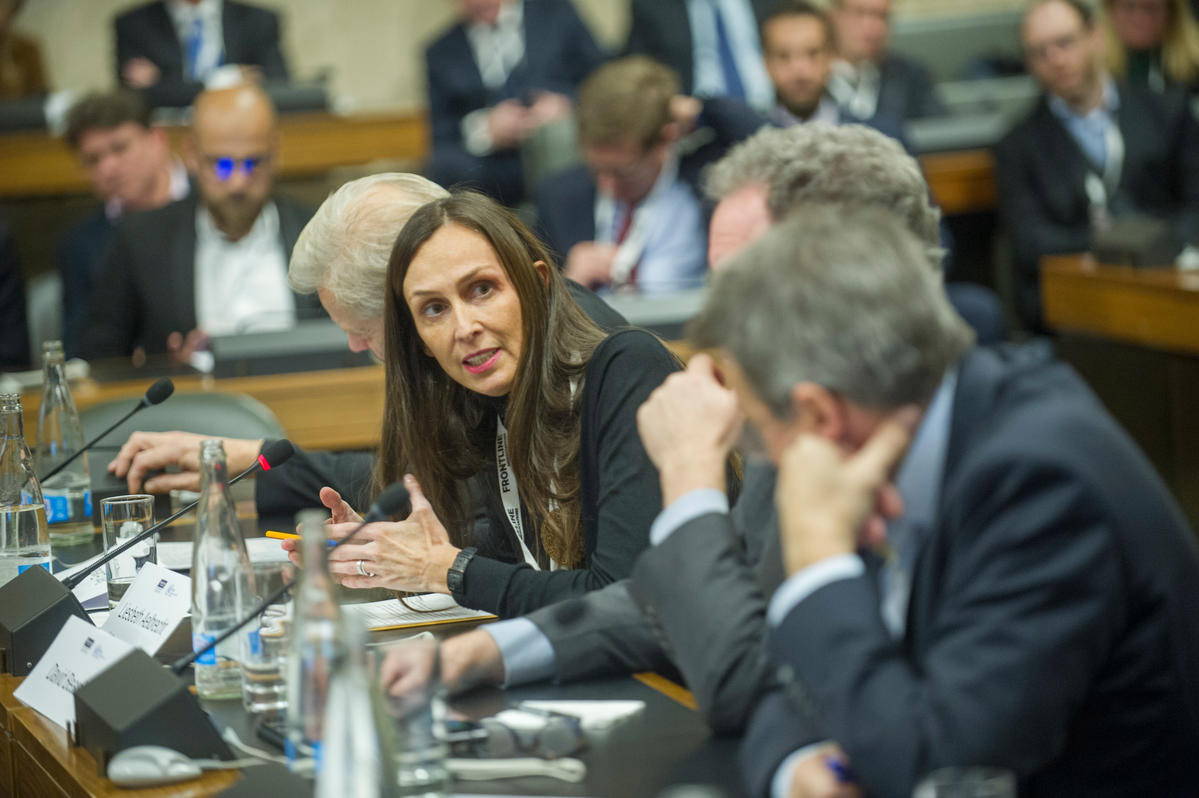 Liesbeth Aelbrecht spoke as one of the high-level panelists at the CCHN Annual Meeting in 2017. (Photo: CCHN)

We were honoured to have Liesbeth Aelbrecht, former General Director of MSF, Operational Centre – Geneva, joining us for the first Peer Circle on Legitimacy and Women in Frontline Negotiations, which brought together female members of the CCHN Community of Practice. We had an opportunity to catch up with her after the event and get tips from her on how to successfully negotiate on the frontlines and career advice for women in the humanitarian sector.

There are many stories in the humanitarian sector of people stumbling into their careers by happenstance. For Liesbeth, humanitarian work was more than just a career choice – it was a calling. Liesbeth’s journey from the private sector to the humanitarian world is one of hope and testimony to our collective humanity. It is this desire to serve that saw her quitting her private-sector job and joining the Médecins Sans Frontières (MSF).

Liesbeth – with not only her wealth of private sector experience in data analysis, procurement, and finance but also her overwhelming desire to serve humanity — and MSF — with its leadership in providing medical assistance to people affected by conflict, epidemics, disasters – were a perfect match.  Since the start of her humanitarian career with MSF, Liesbeth attributes her success to two distinct factors. First, being exposed to supervisors who recognized her talent and helped advance her career. Second, the ability to break down gender stereotypes about dangerous and technical field tasks allowed her to take more responsibility and senior roles.

Why Settle? Push the Envelope

Liesbeth believes that there continue to be gender stereotypes for certain humanitarian professions. She calls on her female colleagues to not partake in reinforcing these stereotypes but proactively demonstrating that they too can handle roles historically dominated by men. She has fought to break these stereotypes, even in taking up her current role.

The former Director-General also notes that in her experience during negotiations women also tend not to take that one step further to get a better deal in negotiations: “When you have everything on the table, you need to see how far you can go. That may make a huge difference to your beneficiaries. I’ve learned how much of an advantage it can be.”

Liesbeth does recognize challenges that women may face in negotiations with counterparts. She concedes that female negotiators may not be taken seriously at first and shares that she has also been mistaken as a notetaker during negotiations. This should not be seen as a disadvantage or a challenge but rather used as a negotiation tactic or simply leveraged to ease tensions or build relationships while not being in the spotlight at the table. She highlights that communicating with counterparts would build trust and confidence allowing them to move past these stereotypes.

However, we all know that this may not always be the case. This is precisely why Liesbeth also highlights the importance of teams in a negotiation, people having clear and distinct roles and using the diversity within the team to further the conversation. She acknowledges that depending on the counterpart, it may not make always sense for her to take the lead. Sometimes, it’s helpful to stand back and have someone else represent you and do the talking. In the end, negotiation is about teamwork: even if there’s just one spokesperson, they’re never there as an individual.

Liesbeth also touched on the choices that women make in their professional and personal lives. Women wear many different hats – as people, as humanitarians, as professionals. These roles are intertwined, especially for women who work in the field: “If you want to have a family, if you’re a mother, I can tell you that anything is possible if that’s what you want. It’s the choice you make. Don’t let anyone tell you otherwise. It’s up to us to make things happen. These roles can all be combined.” 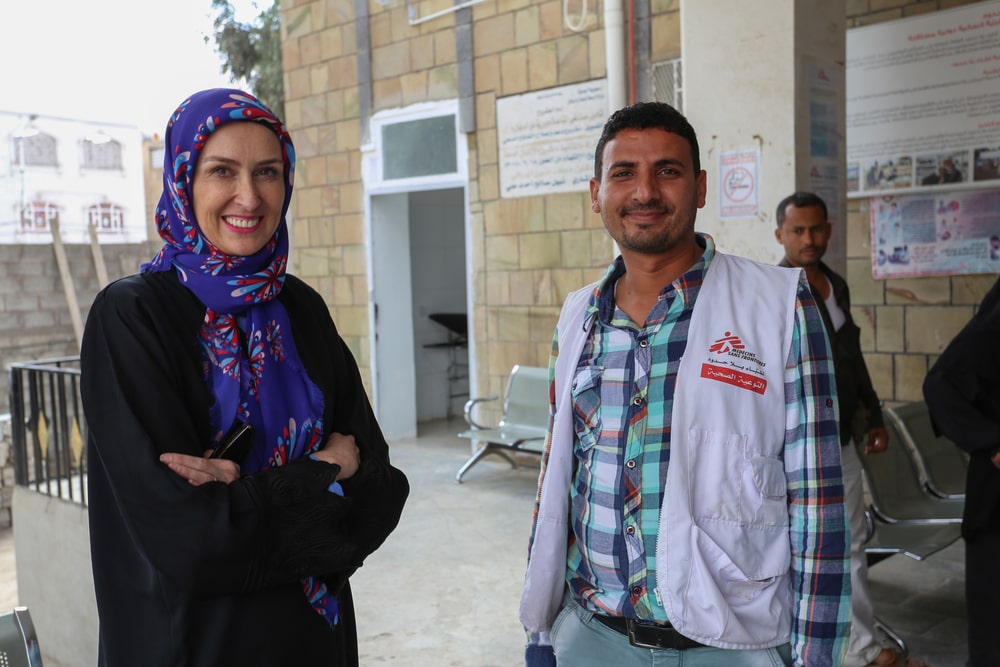 Liesbeth Aelbrecht visited an MSF team working in the General Rural Hospital of Dhi As Sufal district in the south of Ibb Governorate, in Yemen. (Photo: MSF/Majd Aljunaid)

Not about us: About them

Liesbeth believes the locus of everything we do should be weighed against how our decisions, choices, and actions further the cause of the people we are serving. In our line of work, being successful and efficient are means to an end and not the end themselves. In negotiations, we need to secure the best humanitarian outcomes such that the people we intend to serve, they benefit the most, and Liesbeth shared two useful things to consider.

Diverse negotiation teams are critical. Liesbeth noted that we shouldn’t forget that negotiations are as much about the people that we are negotiating with as they are about us. She stresses that we should weigh the advantages and disadvantages of picking particular team members for each negotiation. She points out that having diversity in the team is really important as it allows the opportunity to pick the most appropriate profile for the situation.

Liesbeth also touched on two concrete areas where organizations and individuals can do more to achieve gender outcomes in the workplace.

First, on the issue of gender parity, Liesbeth notes that from her experience there are more women in the field than men in junior positions. She points out that the problem is likely around the retention of female staff at the entry-level rather than a lack of women willing to be in the field.  More flexibility may be needed from human resources on conditions. She also calls for more affirmative action in field operations around training, preparation, and deliberate steps to foster diversity. For example, at MSF, female staff can be trained in-house to operate four-wheel-drive vehicles. “After all,” she says, “everyone wants to be recruited and hired, regardless of colour and gender.”

Second, Liesbeth calls on women managers and supervisors to spot and support talent. They can supervise their teams in a way that encourages them to really develop themselves until diversity is properly achieved. “It is something that we as women can do for other women, as well as for our male colleagues,” she says. “You really need to encourage your staff members to see their own potential.”

This article is part of the Legitimacy, Diversity and Women in Frontline Negotiations Project, which grew out of the CCHN’s study on the role of diversity in frontline humanitarian negotiation, presented at the Annual Meeting of Frontline Humanitarian Negotiators in Geneva in December 2018. The CCHN will continue the conversation on the topic of diversity in frontline negotiations and empower local and international humanitarian workers through our peer-exchange events. We also encourage more women to take part in our workshops, designed to build skills and knowledge in preparation for negotiations in the field. The views expressed in this article are those of the author and do not necessarily reflect the official opinion of CCHN, any of its Strategic Partners nor the authors’ organizations. Are you our member of CCHN Community of Practice? Read the full interview on CCHN Connect.