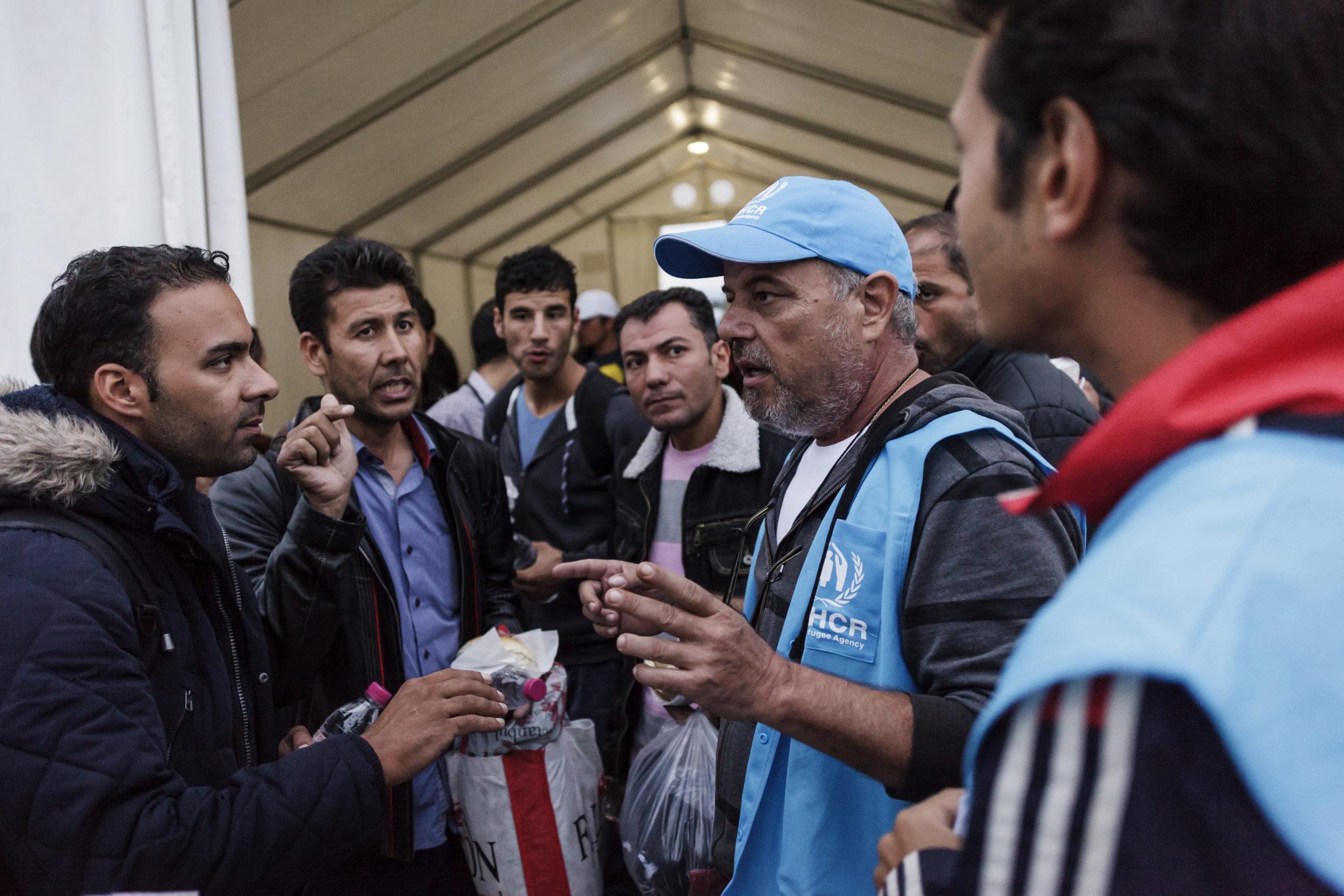 Greece. Refugees and migrants waiting at the Idomeni transit station to cross the Greek-FYROM border in to the former Yugoslav Republic of Macedonia. Photo credit: UNHCR/Achilleas Zavallis

When thinking about “humanitarian negotiation”, the first image that comes to mind is often that of humanitarian workers negotiating their way through a check point or reaching a compromise with a government representative, local authority, or members of an armed group.

This is not always the case, though: humanitarian professionals work in a wide range of contexts and sometimes need to negotiate with different types of counterparts, including local communities living in a crisis-affected region… or even the very people they are aiming to assist.

This would be the case, for instance, when negotiating with a local mayor to extend a city’s electricity to the neighboring refugee camp, or when host communities block the road to a refugee camp.

Humanitarian negotiators may face specific difficulties when their counterparts are displaced persons, migrants, refugees, or again a member of the community hosting them.

The Centre of Competence on Humanitarian Negotiation (CCHN) gathered experiences of skilled frontline negotiators working in settings where migration is taking place. Keep reading to find out what these professionals believe are the ten most important strategies when negotiating assistance for (and with) people on the move.

One of the most significant challenges for frontline negotiators is identifying the right interlocutors among a population in need of assistance.

Those who enjoy leadership or exercise positive power in a community are more likely to have influence over specific groups, such as women and younger people, and may play a key role in supporting your negotiation goals.

Identifying them is more challenging when dealing with groups of people on the move: interlocutors tend to move on to another location and change frequently.

More generally, the negotiation process may sometimes involve counterparts who have a material, financial, political, or ideological interest in the situation – for instance armed groups, gangs, extremist groups, or smugglers.

A useful way to prepare for a negotiation is to analyze the role and perspectives of all the actors involved in the process, identifying their leverage on your counterparts’ positions. This exercise is called “network mapping”.

➡️ Learn how to conduct a network mapping by reading the relevant chapter in the CCHN Field Manual or attend one of our workshops!

Some people or groups can play a key role in facilitating your negotiation process. These actors may, for instance, bridge the gap with local institutions or help ease tensions between people on the move and local communities.

The Network Mapping exercise discussed at point 1 will also allow you to identify “unlikely allies”:  people who do not apparently share your interests or objectives, but can in fact provide unexpected support to your goals.

Real-life scenario
During the Ebola response in Congo (DRC) in 2018, some local communities believed that humanitarian organizations would kill patients in isolation centers, steal and trade organs from the dead, and read people’s minds when taking their temperature. These assumptions coupled with frustrations about movement restrictions, economic hardship, checkpoints etc., led to violent attacks against humanitarian actors.

Once you have gathered enough data, you can establish some common ground with the community counterparts by defining a set of facts and norms on which you both agree. These shared assumptions are called the “island of agreement”. Agreeing on shared beliefs will help you move the negotiation forward to more controversial topics.

➡️ Read the relevant chapter in the CCHN Field Manual on how to build an “island of agreements”.

4. Identify a representative among the local community or the beneficiaries’

Listening to the needs and wishes of people affected by crisis is a crucial part of any successful humanitarian response, but discussing important matters with a large crowd may prove almost impossible.

While planning your negotiation process, you may want to identify one or more representatives from the local or beneficiary communities who can legitimately voice the population’s concerns and influence their actions. If this person is not brought forward by the communities themselves, observe who within the group seems to be in a position of authority, or is well respected by the other members.

5. Identify a spokesperson for your own organization

Real-life scenario
During a distribution of household items, a family from Ethnic Group A feels they have received fewer items than members of Ethnic Group B. One of the family members decides to discuss the matter with a representative from the humanitarian organization, but can’t identify anyone onsite.

He then approaches a driver, who responds that while he is not responsible for the distribution, he’s sure everyone received the same amount. The family member gets angry, starts shouting and is soon joined by other members of Ethnic Group A who begin threatening the driver.

This situation described above could have been avoided if the family member had been able to easily identify the person in charge of the distribution and voice their concerns.

Naming a representative within your organization to be the point of contact for communities and beneficiaries indicates you are approachable, transparent and open to dialogue with the concerned populations. This will help you build a relationship of trust with the communities.

It is important that after some time you evaluate if the representatives of both your organization and the concerned populations are fulfilling their roles and helping you instead of hindering assistance.

If you consider that either representative is not doing the job properly, consider finding a new person to represent the needs of the populations or the person responsible for keeping an open dialogue with them.

Frontline negotiators may sometimes be tempted to reassure donors, managers or even the people they serve by making commitments and promising a certain negotiation outcome. However, it is important to manage the expectations of all parties involved: never, ever make promises you can’t keep!

To make sure your negotiation is successful, you will have to understand the position of your counterpart – but also the needs, motives, and interest of a variety of other interlocutors. You may want to include them in consultations and evaluations and ask for input on program design.

Field practitioners may often find themselves in the position of mediating and managing tensions between the communities living permanently in the region, local authorities, and groups of people on the move – who are often perceived as illegitimate or even criminalized.

Something that may come in handy to negotiators is to develop relationships with local authorities, law enforcement officials or border control agencies. This may help, among other things, to minimize blockages during operations.

➡️ Learn more about analyzing interests and motives of counterparts

Migration is a political matter: it is influenced by government decisions and its successful management depends on the positioning and perceptions of local communities and authorities.

Rules and regulations around migration tend to change constantly. This makes it difficult to clearly understand the political environment humanitarian organizations are working in.

Something that humanitarian practitioners found extremely useful is the development of their humanitarian diplomacy and advocacy skills, which in turn helped them better influence local decision-makers.

9. Establish your legitimacy through clear communication

In order to begin a negotiation process in the best possible position, frontline practitioners need to appear legitimate in the eyes of the interlocutors with whom they discuss.

This is sometimes a challenge when working in the context of migration: local communities, law enforcement authorities or border control agencies may often see humanitarian organizations as “people smugglers” and distort their motives.

In these situations, it is crucial to provide clear, factual and correct information to all interlocutors. This will help you reinforce the legitimacy of the negotiation team in the eyes of your counterpart.

➡️ Learn more about defining your own position in a negotiation

Finally, remember that many other humanitarians have faced similar challenges before. They have extensive experience negotiating with host communities as well as the people they are assisting.

Being able to reach out to colleagues and ask them for advice on how they dealt with difficult situations can help you gain a new perspective of the situation and, hopefully, find new and creative solutions.

➡️ Looking for a community of like-minded practitioners? Attend one of our workshops and become part of the CCHN Community!

You’ve learned some tips to negotiate in the context of migration. What now?

Negotiating at the frontlines remains a complex challenge for many humanitarian practitioners. If you still feel the need to learn more, the CCHN provides several tools to support you as you plan and implement your negotiation strategy:

Our manual draws on the experiences and perspectives of hundreds of humanitarian practitioners. It offers a set of practical tools to plan and prepare negotiation processes for the purpose of assisting and protecting populations affected by armed conflicts and other forms of violence.

➡️ Attend one of our workshops and become part of the CCHN community.

The CCHN’s “Peer Workshops” provide a safe space for sharing negotiation experiences, acquiring new skills and learning from other practitioners. The CCHN organizes several workshops every month, both in person and online, entirely free of charge. All the practitioners who complete the workshop become part of the CCHN Community of Practice, a group of professionals who share a passion for humanitarian negotiation and support each other through all kinds of negotiation challenges.

If you are a field practitioner involved in a negotiation process, maybe you’re facing many of the challenges and dilemmas we described in this article. Get in touch with the CCHN and tell us more about it – we’ll provide additional information on the tools and methods available to support you.